When they arrive at Dimora Sighé, in the heart of Salento (Puglia), many guests ask us where the idea of restoration came from. Let’s go back to the origins: Saverio bought this traditional house, which was used to store the harvest, in the ‘90s. He didn’t imagine that from his desire to restore an abandoned typical mansion, such an appreciated villa from all over the world would come. Everyday, going to his close office, he thought about the destiny of that typical building. Being both in the world of constructions and holiday rentals, in the summer 2018 he decided to take action and start the restoration.

The building was very abandoned and almost nobody believed in it, but the interior designer Annagrazia saw the potentiality of that typical mansion and thought that would become a great place for charme rentals.

At the same time, Elisa, Saverio’s daughter, passionate about luxury villas and with experience in the short stay home rentals, got in love accepted the challenge to manage the villa, above all, to give a new life to a typical ancient building. The project started and it was very exciting, due to the great affinity between the villa manager Elisa, in love with both international and local culture, and the interior designer Annagrazia, who is always full of great ideas to enhance places. They both worked a lot on understanding the true spirit of the place, the so called genius loci.

They found two main directions to give an authentic soul to the project: the first is the quarry, on which the mansion was built,with its lines which have been graphically mentioned in different parts of the villa, and the second is the theme of silence, from which the ancient Greek word “Sighé” comes. The luxury villa is in front of the most Eastern monastery in Italy, devoted to the dialogue with the Near Est culture.

An ancient Greek word, studied by Elisa, was the perfect choice to describe the spirit of a place where to relax, stay with yourself, in an atmosphere which is sophisticated and simple at the same time.

The restoration process was magic, indeed the construction site is a real period of gestation, is con 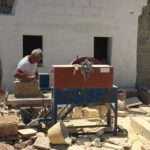 centration, a present moment with no distractions, a place of possibilities and choices. Here you can still observe the deep dedication of labour, the silence of the dialogue with materials world.

Everyone in this project decided to dedicate this work to the great idea of taking the light of future in the past. This is our philosophy, which we share with the guests coming from all over the world.