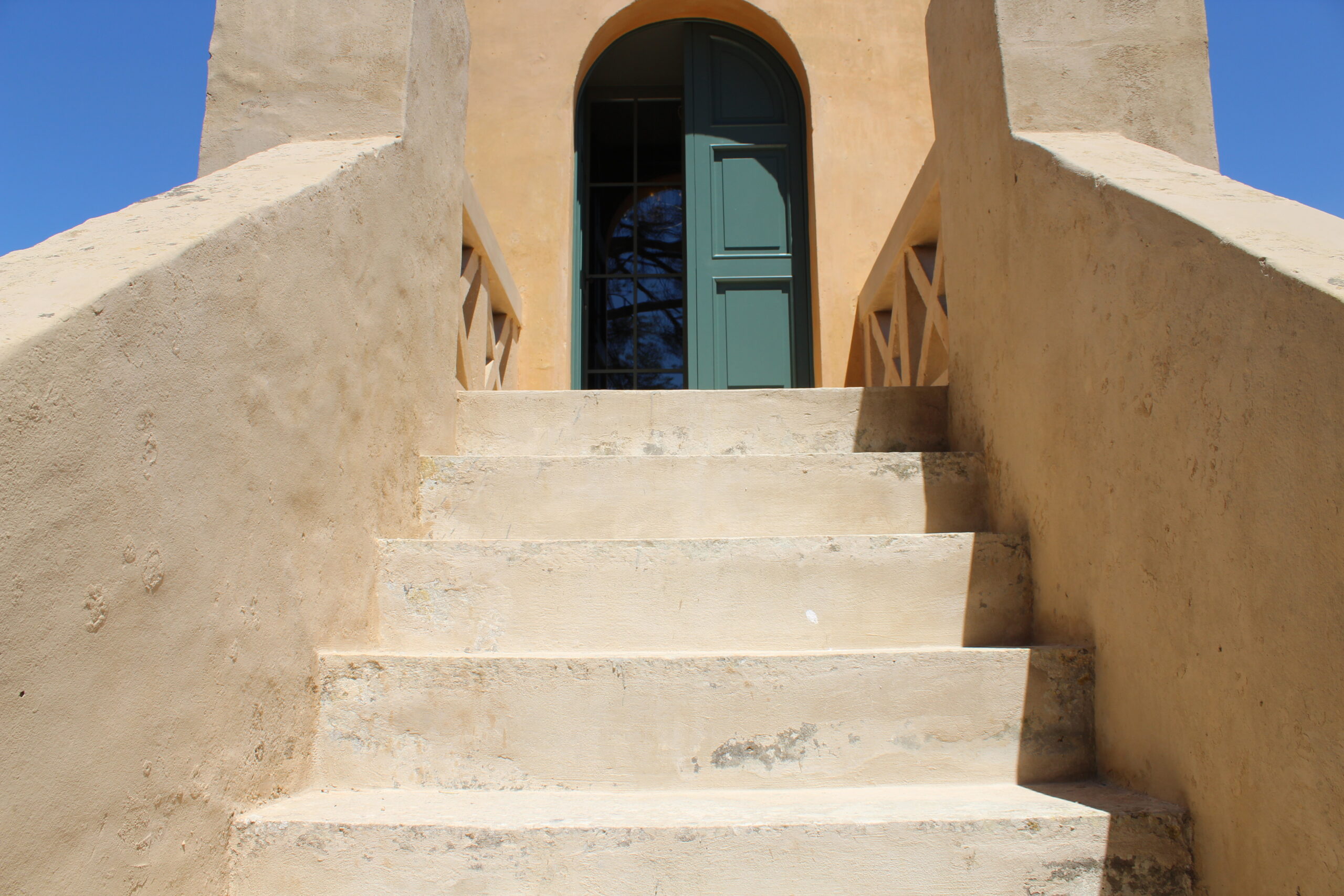 The green countryside of Trepuzzi, near Lecce, the incessant song of cicadas, the wind that brings ancient painful stories that find redemption in the present.

Legend has it that Elvira was a little girl whose parents gave her a beautiful castle, today Castle Elvira, and that to thank them she cooked mushrooms, including a poisonous one that led to her death. From there, the manor was abandoned.

Today, however, the Brown-Riseley couple have brought the fortress back to a second life, thanks to a four-year restoration with the architectural firm Filotico and Partners.

Even its tower, now sister property, is enjoying a new life: Tower Elvira rises in the surrounding countryside with a sinuousness that conveys a sense of security, like all the solitary towers with which the Salento is studded.

Once a dovecote tower, it now accommodates guests in two suites: one located on the upper floor, called “The tower top suite”, featuring a circular rooftop pool with a view of the entire surrounding landscape; and one located on the lower floor, “The tower park suite”, which is particularly striking due to the illuminated tree of life on the large mirrored wardrobe that creates suggestive plays of light together with the other mirrors, a huge Timothy Oulton bed, and various museum pieces in the room.

Two other suites are located in the adjoining farmhouse area: the “Pepper Suite”, characterised by an original multi-vaulted ceiling, and the “Agave Suite”, in which the farmhouse’s old wooden oven has been converted into a bathroom with a bathtub.

It is not only the uniqueness and beauty of the facilities that leaves a strong memory of the stay, but also the hospitality and warmth of the owners and the entire team, led by manager Giacomo Attanasio, which makes Tower Elvira and Castle Elvira friendly and welcoming places.

In fact, Harvey and Steve told us about their love at first sight with these magnificent buildings, at the moment when they were being abandoned and the continuous discovery of the places around them, once the renovation phase began, such as the moment when under brambles and bushes a magnificent Italian-style garden, now a well-kept path leading to the castle’s swimming pool, was revealed.

And also the moment when, while cleaning the farm building, they discovered the marvellous star vaults, not so common for a structure intended exclusively for agricultural life.

In short, amazement is at home at the two sister properties, and they have been enriched by numerous works of design, and works of art by Harvey Brown himself, also in collaboration with other artists, including David Sheinman, whose energy and creativity he has chosen to bring into the project, with portraits of guests who have celebrated some particular moment in their lives at Tower Elvira, etc.

Harvey Brown is in a constant explosion of ideas, as evidenced by his artistic style, which is a mix of photography, collage and sculpture. He also told us about his NFT project whose proceeds go to educational projects for Ukrainian children. For him, in fact, the didactic, or rather maieutic, side of art is an important aspect to cultivate, so that everyone can bring out the creativity that bubbles up inside.

Another very important aspect of life at Tower Elvira is food. Prepared by the popular mastery of chef Fabiana Taurino, evidently inspired by Cucina Povera, and using only local ingredients, the food at Tower Elvira is an explosion of flavours that conquers even the palate of those already accustomed to Salento cuisine: in particular the parmigiana, served in a round rather than the usual square shape, leaves indelible memories, as do the excellent Italian-style appetisers, the mussels au gratin, the parmesan baskets with local cheese, the meat from one of the best local butchers, and finally the dessert.

All supported by lovely international conversations with the owners and other guests with whom you immediately get to know, in the magic bubble that Tower Elvira can create.

Also noteworthy and appreciable is the landscaping effort on the part of the owners, who in addition to restoring all the surrounding greenery, are also trying to save the olive trees, scourged throughout the area by Xylella, with experimental treatments. Another nuance of the love for rebirth.